Solar panels are increasingly being installed on company roofs in the port of Rotterdam.

Roofs full of solar panels: a fantastic development according to Michel Bresser, Area Manager and Solar Manager at the Port of Rotterdam Authority. “Renewable energy such as wind and solar power is crucial in making the port more sustainable. That’s why we think it’s important that companies use solar power where possible.” 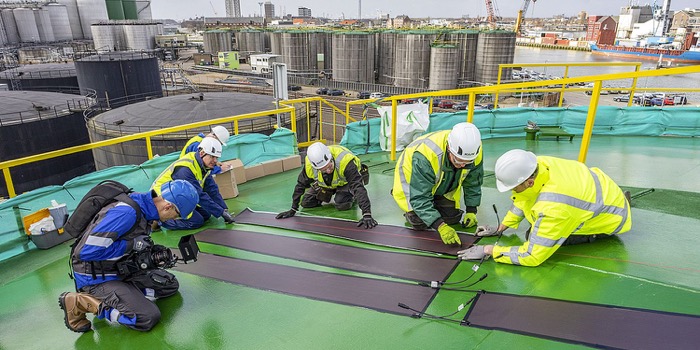 He’d like to emphasise the “where possible”. Because solar panels aren’t always an option. “Roofs must meet various requirements; for example, a roof must have adequate load-bearing capacity, the building must have a large enough connection to the power grid, and the panels must be able to remain in place for fifteen years.”

That’s why Michel and a team are offering advice to companies that aim to use solar power, as there’s plenty of potential for this on roofs in the port. An increasing number of companies are installing solar panels on roofs. And that’s logical because it is an attractive way of becoming more sustainable. These days it’s also often possible without companies having to invest much themselves.

Vopak mainly has tank roofs available. And these are different from roofs on warehouses and offices. Tank roofs are round and angled and can’t simply be subject to heavy loads. That’s why the company is looking beyond solar panels that are suitable for normal roofs.

The tank storage company has recently had flexible, thin and lightweight Solar Powerfoil installed on the Vopak Vlaardingen storage tank roof. The most important products stored at this terminal are edible oils.

“Large amounts of energy are needed to store and pump these products, because many edible oils are prone to congealing in our climate,” stated Ard Huisman, Managing Director of Vopak Vlaardingen. “As well as insulation, this Solar Powerfoil is one of the measures we are currently testing to see how we can further reduce our CO₂ footprint.”

If the test proves successful, other tank roofs and tank walls can be fitted with solar film.