Aldo Krijgsman Director of Visser & Smit Hanab, said: “Visser & Smit Hanab has been involved in this project from the outline design phase of the project until the final completion. We are proud of the added value which we have delivered to HES Hartel Tank Terminal in the realization of their new tank terminal.” 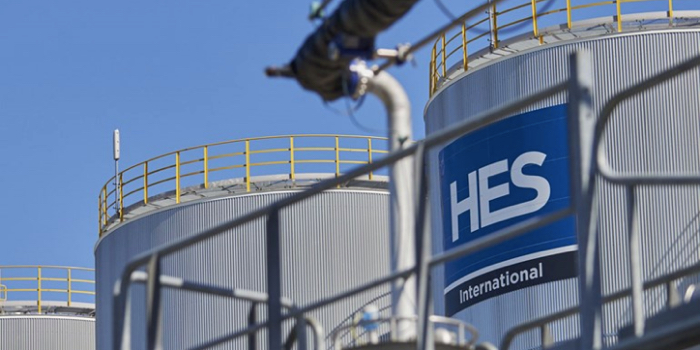 An online statement from HES said: “the completion of this part of the project represents another step forward in the development of the state of the art 1.3 million cbm liquid bulk storage terminal.”

Visser & Smit Hanab is a 100 per cent subsidiary of VolkerWessels and HES Hartel Tank Terminal is a project of HES International BV.

HES said the installation of these high-tech subsea pipelines “must be done with absolute precision”. The total package of pipelines installed consists of one steel pipeline of 24 inches (600mm), four of 16 inches (400mm) and one HDPE pipe of 315 mm, all with a length of around 1,000 metres.

The pipelines were installed by means of Horizontal Directional Drilling (HDD). Visser & Smit Hanab have also installed pipelines in the pipeline corridor and the created manifolds.

Krijgsman added: “The Horizontal Directional Drillings, which have been executed were complex and challenging, nevertheless they have been installed in a safe and controlled manner. The cooperation between Visser & Smit Hanab and HES Hartel Tank Terminal on an engineering, operational and safety basis has been excellent.”

Charles Smissaert, Project Director of HES Hartel Tank Terminal, said: “Due to the constructive and professional cooperation with the team of Visser & Smit Hanab, the subsea pipelines were handed over to HES within budget and on time. Moreover, the work is executed without any incidents and we attach great value to that. Safety is crucial for the success of this terminal and our future business.”

In addition to transport by pipeline, loading and discharge will predominantly take place by vessels and barges, the statement said. In recent months, it said “significant progress” has been made in the development of the 1.3 million cbm tank terminal for the storage and transhipment of petroleum products and biofuels in the Port of Rotterdam.

The Port of Rotterdam Authority completed works on the maritime facilities at the end of 2019. Complying with the COVID-19 measures, construction works on tanks and the related civil and piping works are currently continuing unabated.

HES Hartel Tank Terminal will be the first terminal in the Netherlands that will be built according to the latest PGS 29 regulations for tank storage, meaning that the terminal will meet very high safety and environmental standards. After commissioning the terminal will be operational 24/7 and it will provide jobs for approximately 80 people.