SOCAR Turkey has announced plans to expand and develop two facilities. One of the two projects, SOCAR Storage Terminal Tank Expansion Project, was opened during a ceremony and the foundation of STAR Refinery Crude Oil and Petroleum Intermediary Tanks Project was laid.

With the new investments, the storage capacity used by SOCAR Turkey and its customers will reach to 2.5 million cubic meters. 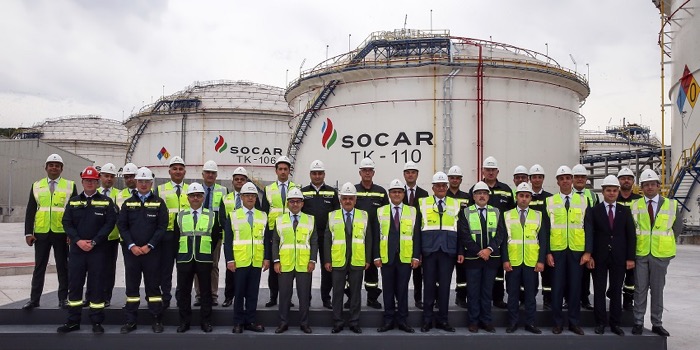 Speaking at the ceremony, SOCAR President Rovnag Abdullayev stated that SOCAR continues its investments in the oil, natural gas and petrochemical fields: “Last year we were here for the inauguration ceremony of the STAR Refinery. We are happy to be back in Aliaga for our new projects within a year. Our petrochemical investments constitutes an important pillar of our operations, creating a long-term income source by bringing added value to the Azerbaijan economy, as well as making a big contribution to the region and Turkey.”

In this context, Petkim generated TL 47.2 billion revenue and more than TL 4 billion net profit during the last decade. Furthermore, 4 million tonnes of oil were refined in the STAR Refinery, which will reach 8 million tonnes by the end of this year.

Abdullayev underlined that the increase of storage capacity will also contribute to the productivity, commercial flexibility and production safety of STAR Refinery. SOCAR President closed his speech with these words: “Centuries-old friendship between Azerbaijan and Turkey has made great progress in the economic sphere with the will and support of the presidents of the two countries. We look forward to extending our cooperation and strengthening our economic ties in the future.”

SOCAR Storage Terminal Tank Expansion Project inaugurated at the ceremony, includes 12 tanks with a total capacity of 335,000 cubic meters. Currently the terminal is the largest one in the Aegean region. With the new facilities, which will further increase the capacity, it will be one of Turkey’s five largest terminals.

The facility will store diesel, gasoline, jet fuel and reformates, construction of which started in September 2017. The next stage will be STAR Refinery Crude Oil and Oil Products Tanks Project, started with the groundbreaking ceremony. This project will increase the refinery’s storage capacity and enhance operational flexibility. The project that will provide additional 342,000 cubic meters of storage capacity is scheduled to finish in 2021.