Saudi Aramco has confirmed that it is to acquire a controlling stake in SABIC (Saudi Basic Industries Corporation). The tie-up involves the acquisition of 70 percent of SABIC from the current holder, the Public Investment Fund (PIF) of Saudi Arabia. The deal is valued at $69.1 billion. The remaining 30 percent of SABIC is publicly traded on the Saudi stock exchange.

What does this mean for the petrochemicals industry? 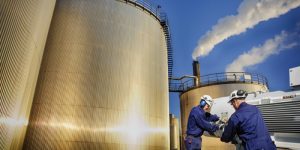 Wood Mackenzie views many drivers for and synergies from this large transaction. “Three pillars we see supporting the deal for both companies are vertical integration, geographical expansion and technology transfer,” he said.

SABIC was formed in 1976 by royal decree and has undergone rapid expansion. It holds strong market positions in key petrochemical products such as polyethylene, polypropylene and ethylene glycol. SABIC is also a strong market player in the fertiliser and metals industries. SABIC has successfully expanded outside of Saudi Arabia and across chemistries, via acquisitions of DSM, Huntsman Petrochemicals, GE Plastics and more recently a large share of Clariant.

Saudi Aramco has public aspirations for 3 million bpd of crude oil to be petrochemical-focussed. The company does have existing JV positions in refineries, particularly in Asia. There have also been multiple announced plans for further major expansions. Acquisition is a valid parallel strategy to enhance and further this position.

The acquisition of SABIC can allow wider collaboration and avoid competition, as the two companies more recently have been overlapping into the natural positions of the two separate businesses, particularly around petrochemicals. Steve Zinger outlines three key motivators for the deal between Saudi Aramco and SABIC.

The portfolio of the two companies aligns well. Expansion for Saudi Aramco into further downstream exposure offers protection in a lower oil demand outlook. Petrochemicals are expected to be one of the main drivers of oil demand growth through to 2040 and SABIC brings this through deep downstream market positions.

One combined entity could allow more efficient capital allocation and focus on mega-projects, such as the crude oil-to-chemicals (COTC) project planned for Saudi Arabia and large refinery-petrochemical integrated ventures in other parts of the world.  SABIC has a strong and highly profitable base chemical production footprint in Saudi Arabia, based around several large ethane-based petrochemical projects. Saudi Aramco’s activity in paraxylene investments is a chain where SABIC is largely absent. The resulting co-product benzene production will fit well with SABIC’s Engineering Plastics  business.

An acquisition approach allows Saudi Aramco to obtain further exposure to petrochemical markets more quickly than would be the case via a sole focus on organic expansion and development. The human aspect of the upstream and downstream industries also requires different competencies and skill sets. Acquisition accelerates this development across both companies.

Saudi Aramco has existing joint venture positions in South Korea (S Oil) and in China (Fujian) and is also currently planning multiple refinery-integrated investments globally in the US (Motiva), Saudi Arabia (COTC and SATORP projects), India (Ratnagiri) and Malaysia (RAPID). All projects contain a petrochemicals focus, with many being centred in long-term petrochemical growth markets. SABIC’s expertise in olefins, polyolefins and downstream aromatics markets could support development of these projects.

A combined Saudi Aramco/SABIC entity allows truly global reach and market-leading positions across a strong vertically-integrated portfolio of oil-to-chemicals. Synergies and optimisation across the combined global footprint is undoubtedly possible.

SABIC holds very strong petrochemical assets and several technologies in some of the chains that it has market leading positions, such as polyethylene and ethylene glycol. Strengthening its stake in Clariant also provides SABIC with further technology access in the speciality chemicals area, particularly around catalysis.

Saudi Aramco also holds proprietary technology in the COTC area and now a very strong position in the C4-chemical value chain,. Both SABIC and Saudi Aramco have also formed successful JVs with many other major players in the petrochemical industry such as DowDuPont, ExxonMobil, Total, etc.

Saudi Aramco is looking to add value to its refining portfolio via petrochemicals. Technology transfer across the two companies provides a wider range of possibilities and options for potential project configurations. The combined Saudi Aramco/SABIC entity also forms a strong basis for longer-term technology developments in the entire energy value chain.