At the CWC LNG & Gas Summit that took place in Tokyo, Japan on February 19-20, Paul Varello, CEO and President of Commonwealth LNG, addressed the critical need for greater innovation in the design and construction of the next wave of LNG projects.

As one of the Summit’s primary sponsors, Commonwealth LNG had the privilege of participating and speaking at the event. Varello made his statement during a lively panel discussion on Tomorrow’s LNG Supply Models. 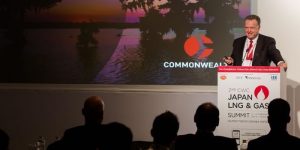 Citing the high construction costs and schedule delays that have negatively impacted the first wave of U.S. LNG projects, Paul underscored how innovation in the design and construction of future LNG projects would be necessary to meet the evolving demands of LNG customers.

“As a participant in the second wave of LNG liquefaction projects, we had the distinct advantage of sitting back and studying the first wave of projects to see what we could learn from the problems they encountered and to apply progressive solutions to address those problems,” stated Varello.

Varello’s message was not lost on the Tokyo audience, many of whom have witnessed firsthand the many issues plaguing these first U.S. LNG projects. “The definition of insanity, as Einstein rightfully acknowledges, is ‘doing the same thing over and over and expecting different results.’ At some point, you have to adjust your approach.”

Among the innovative ways that Commonwealth LNG is developing its project is a purer application of modularisation. “A lot of projects claim to be modular, but, in reality, few actually fit that definition.”

In cooperation with engineering and design powerhouses TechnipFMC and Arup Group, Commonwealth will employ a fully-modular design and construction approach for the project’s liquefaction trains, auxiliary equipment and even its LNG storage tanks. In doing so, the company will dramatically reduce the amount of craft labor on the site, lower the capital expenditure (CAPEX) cost by roughly one billion dollars and shave a full year off the field construction schedule.

Commonwealth LNG is an 8.4 mtpa LNG liquefaction and export project located on the west bank of the Calcasieu Ship Channel at the mouth of the Gulf of Mexico near Cameron, Louisiana. Commercial operations are expected to start in the first quarter of 2024.