JAX LNG, an LNG facility located at Dames Point in Jacksonville, Florida, held a ribbon-cutting ceremony May 16 to signify the official start-up of the newly constructed plant.

JAX LNG is the first small-scale LNG facility in the U.S. with both marine and truck-loading capabilities. The state-of-the-art facility was constructed through a joint venture between Pivotal LNG and NorthStar Midstream. 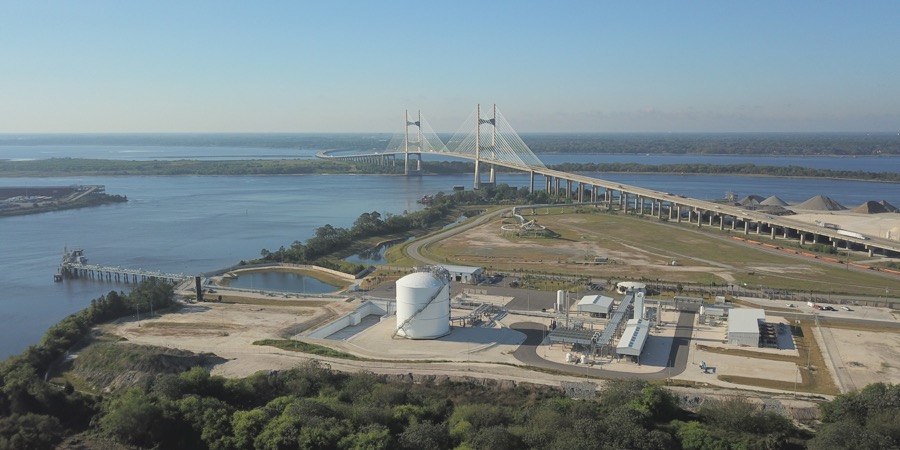 “Pivotal is committed to transforming the nation’s energy landscape by leading the way in how we supply liquefied natural gas to our customers,” said Tim Hermann, president of Pivotal LNG. “One way we are doing this is through the development of the JAX LNG facility. With our partners NorthStar, we’ve implemented innovative solutions to make clean, safe, reliable and affordable LNG available to marine and inland customers that can be served from the port of Jacksonville. ”

Liquefied natural gas is a clean, domestically produced alternative fuel serving multiple industries to reduce emissions and energy costs. When using LNG as a marine fuel on a well-to-wake basis, greenhouse emissions are reduced up to 21 percent.

In addition to marine and trucking companies, the JAX LNG plant is positioned to serve other industries, including rail, drilling, mining, power generation, commercial and industrial.

Currently, the JAX LNG facility has the capacity to produce 120,000 gallons of LNG per day and store more than 2 million gallons of LNG. There is room at the site to expand the facility and add two liquefaction trains and a second storage tank which would increase LNG production capacity to 600,000 gallons per day and store up to 4 million gallons. JAX LNG can use its advantaged location on the water to service its maritime customers via LNG transport vessels.

NorthStar is owned by funds managed by Oaktree Capital Management, L.P. Jared Parker, co-portfolio manager of Oaktree’s Infrastructure Investing strategy stated: “We believe LNG is the logical fuel choice for ships calling on ports in the United States. We are excited to be developing the infrastructure necessary to make this option available for the transportation needs of companies focused on emission reductions and meeting IMO 2020 requirements.”

Tim Casey, senior vice president of LNG, commented: “NorthStar and our owners are excited about the partnership we have with Pivotal LNG and Southern Companies in JAX LNG. We look forward to expanding our ability to bring environmentally-friendly LNG as a next generation fuel to the market”.

Construction of the JAX LNG facility began in late 2016. Its achievements thus far include the first-of-its-kind, ship-to-ship bunkering operations in the U.S. and loading of TOTE Maritime’s Clean Jacksonville, the first LNG bunker barge built in the U.S.