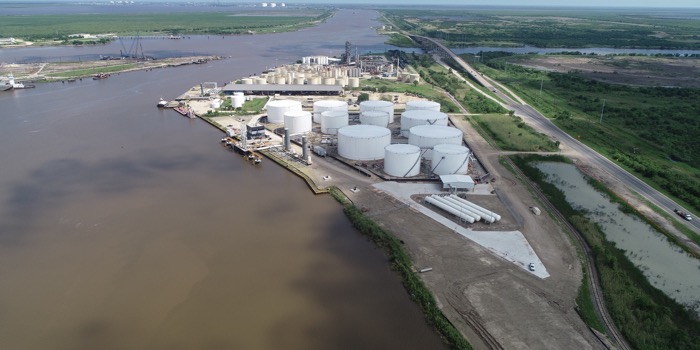 “The substantial expansions at our Port Arthur and Corpus Christi facilities signify HEP’s commitment to designing and constructing fully-engineered facilities that are tailored to meet the exact needs of our customers,” said HEP Co-Founder and President Brad Bynum.

“We currently have more than 470 acres for additional Gulf Coast expansion projects, including significant water frontage. We will continue to work closely with our customers to understand their needs and evaluate growth projects that create beneficial results for all participants within the supply chain.”

The Port Arthur facility expansion consisted of 12 new tanks, four butane bullets, two barge docks, one ship dock and a 6.5-mile, bidirectional pipeline. With the completion of these additional assets, HEP is able to blend gasoline with up to six separate components at delivery rates of up to 40,000 barrels per hour, to meet specific regional and international quality specifications. This allows customers to optimise the value of the molecules specific to each market.

HEP acquired a majority interest in the Port Arthur facility in 2015. Strategically located on approximately 450 acres of land on Taylor Basin and Taylor Bayou, the facility is 13 miles from the Gulf of Mexico via the Sabine Neches Waterway, with inland barge access to the terminal via the Intracoastal Waterway. In 2017, the company reconfigured the assets from a railcar-to-barge crude oil operation, to a barge-to-railcar refined products operation. The terminal can handle a variety of bulk liquids including refined motor fuels, crude oil, and condensate.

HEP recently contracted with an existing customer to load additional unit trains at their Corpus Christi bulk liquids terminal facility, bound for new destinations in Mexico. As part of the contract, HEP is acting as an agent to assist with oversight of the engineering, procurement and construction of a new receiving terminal in northern Mexico.

Once completed later this year, the new receiving terminal will increase the utilisation of HEP’s 65,000-BDP rail loading facility. HEP currently delivers approximately 35,000 BPD of refined petroleum products by unit train to locations in central Mexico, including the cities of San Jose Iturbide and Irapuato within the state of Guanajuato.

Strategically located on 41 acres within the Port of Corpus Christi, HEP’s terminal facility currently consists of six tanks with 480,000 barrels of storage capacity, an MR Class ship dock, a 12-inch pipeline with connectivity to six local refineries, and unit train loading facilities capable of loading one unit train per day.

The terminal is expandable up to 2.5 million barrels of total storage capacity and is currently permitted for immediate expansion up to 1.2 million barrels. Additionally, HEP and the Port of Corpus Christi jointly funded the engineering and permitting of a new Suezmax class dock, which will be capable of the movement of refined products, crude oil, condensates, NGLs, and LPGs.