Significant progress has been made on building the tanks and the related piping and Port of Rotterdam Authority has completed works on the maritime facilities. These facilities have been handed over to HES on December 17, an important milestone for the project. 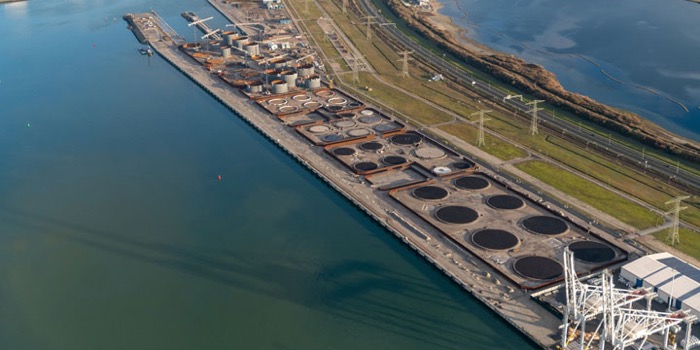 Port of Rotterdam Authority started construction on the maritime facilities in January 2018. In addition to a 1,200 metre long deep-sea quay wall, a 1,000 metre-long quay wall has been built for inland barges, together with a 350 metre long jetty. At the same time, dredging and earthmoving work have been undertaken, as well as bank and harbour basin protection. Work on all these maritime facilities are completed at the end of 2019, as planned.

Subsequently works on an underground pipeline connection to the nearby refinery of BP is nearly finished. Construction works for building the tanks and the related piping is in full swing and is executed by a consortium of contractors.

Around ten companies, from engineering companies to suppliers of building materials, will construct one of the most modern and safe liquid bulk storage terminals in the Netherlands. The new tank terminal will be the first terminal in the Netherlands that will be built according to the latest PGS 29 regulations for tank storage, meaning that the terminal will meet very high safety and environmental standards.

In the first quarter of 2020 HES will start with recruiting the first of 80 new colleagues who will be responsible for running the terminal in the future. After commissioning, which is expected from Q3 2021, the terminal will be operational 24/7.