Following their successful partnership in 2017, in which seven fully-assembled tanks with a joint capacity of at least 70,000 cbm were delivered, both HBTT and SJR Tank Construction are delighted to start a new partnership. The storage tanks each have a capacity of 3,400 cbm, a diameter of 12 metres and are 30 metres in height. The first four tanks are currently being constructed in the conditioned production hall at the RDM site in Rotterdam and will be followed quickly by the final two tanks. The completely finished tanks will then be transported by water and installed in the foundations at HBTT in Botlek. 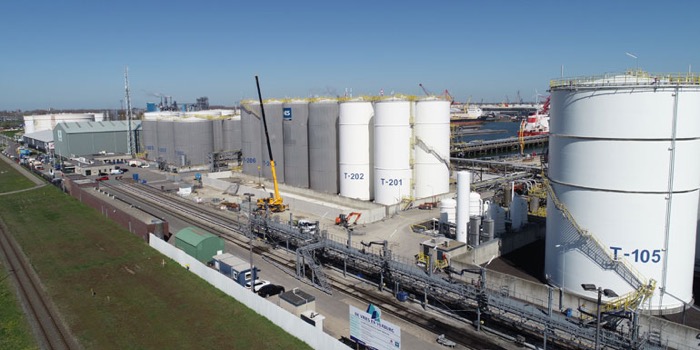 The construction of these six tanks forms part of a considerable investment in HBTT’s tank storage. The capacity was doubled to 490,000 cbm in 2017. The delivery of these six tanks increases the total storage capacity to 510,000 cbm. As well as the partnership with SJR Tank Construction, civil engineering works were also contracted to De Vries en Verburg Bouw and are already in full flow. HBTT is one of the most modern and certified tank terminals in the world and is the first terminal in the Netherlands to hold the ISO 28001 certificate.

Robert Sloot, owner of SJR Group, is very pleased with this partnership. “Following the successful partnership in 2017, we have again gained the confidence of HBTT for this project. We are able to complete the construction entirely off-site for this expansion as well. This reduces inconvenience at the terminal as far as possible and enables us to construct and deliver high-quality tanks in a safe way.”