Six tanks, totalling 20,000 cbm, have been transported by floating sheerlegs from the production hall where they were built to the HES Botlek Tank Terminal where they will soon be used for the storage of biofuels.

The tanks were transported by floating sheerlegs, not an everyday sight on Rotterdam’s Nieuwe Waterweg as the 30-metre-high structures were carried hanging from the cranes. A total of six tanks travelled the route from tank builder SJR Group on Heijplaat to HES Botlek Tank Terminal (HBTT) in the Botlek harbour. 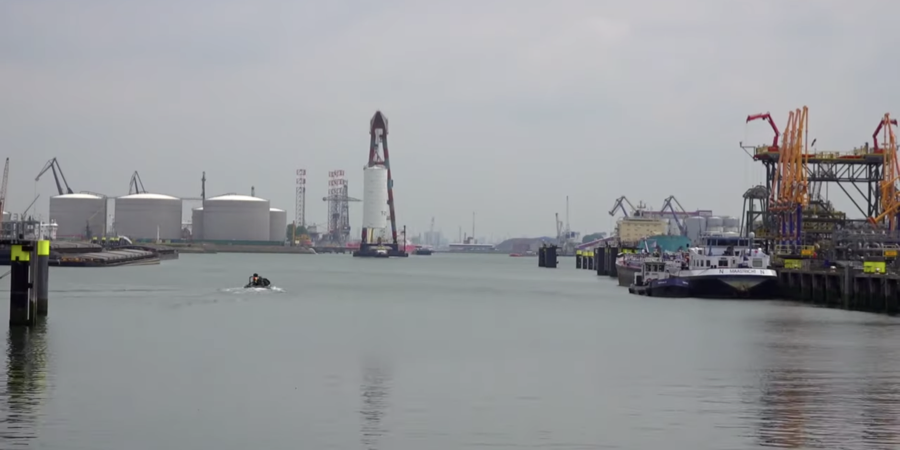 “A piece of logistics art, because along the way the necessary obstacles had to be overcome. It all started in the production hall where the tanks with a diameter of 12 metres were welded together over the past few months,” said project leader Anne Vonk Noordegraaf of SJR Group. “With a height of thirty metres, these tanks are quite up to scratch. They only just fitted through the doorway of our warehouse. With the construction for the transport around it, we had a few centimetres of room for manoeuvre. So fit and measure!”

Road transport of such dangers is not an option, so the transport takes place by water. This is done with a ‘floating sheerlegs’, an extremely strong, floating crane, in this case the HEBO Lift-9. A bit of power is needed too, given the 110,000 kilograms that each tank weighs. After that it is one and a half hour sailing to the HES Botlek Tank Terminal.

Here is another special vehicle is used: a Self-Propelled Modular Transporter (SPMT), a gigantic trailer supported by endless wheels. When they arrive at their final destination, a crawler crane lifts each tank onto the foundation, after which they can be connected.

With the six new tanks, HBTT has now expanded its tank capacity by 20,000 cbm. “This will give us a total storage capacity of 510,000 cubic metres,” said Coen Janssen of HBTT. “By way of comparison, that’s about the capacity of some 140 Olympic swimming pools. The new tanks are badly needed, because the demand for storage in the port is high,” he said. “Especially for biofuels, for which these new tanks are intended. The supply or transport takes place by ship, truck or train, after which we temporarily store the ‘liquid bulk’ for the customer. Subsequent transport is also by water, road or rail.”

Special attention was paid to the storage of biofuels in the design of the tanks. For example, they contain a heating coil, which prevents the contents from clotting,’ Anne explains. Now that the tanks are in place, SJR Group is embarking on the final part of the delivery: the connection and testing of the tanks. We do this with water, paying attention to leaks and misalignment, among other things.

Once that process has been completed, the tanks are ready for use.