The newly monitored sites are located along the Mississippi River and feature dock access for waterborne shipments. Storage data for these locations provide a natural complement to the report’s existing coverage of Louisiana waterborne crude deliveries. Furthermore, five of the six facilities added to the report are major oil refineries, allowing subscribers to track regional refiners’ stocks on hand along with inventories at connected supply hubs.

This expansion follows the October 2017 redesign and expansion of the St. James Supply Hub Report into the Louisiana Gulf Coast Crude report. As a part of that revamp, five terminals were added, including the Louisiana Offshore Oil Port (LOOP) storage hub in Clovelly, LA, allowing unprecedented insight into the nation’s largest privately-owned crude storage facility. 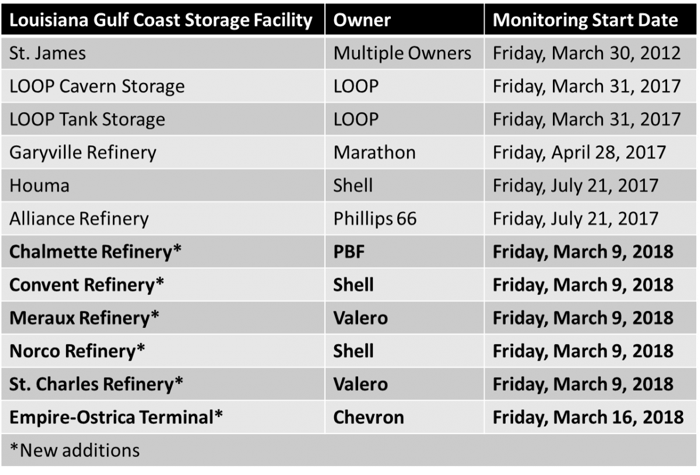 Already the principal distributor of crude oil in Louisiana, LOOP’s prominence in the market has expanded since export operations at the facility began in mid-February. LOOP’s impact on regional crude supply was visible in the weeks leading up to the company’s first export loading. Starting with the January 12 report date, builds at LOOP were the primary driver behind a reversal in the downward trend of PADD 3 stocks that began in November 2017.

Genscape data between weeks ending January 12 and February 16 showed that LOOP accounted for 14.1 million bbls of the total 20.1 million-bbl PADD 3 build reported by the Energy Information Agency (EIA) for the same period. Following the export departing on February 18, Genscape reported that LOOP stocks for week ending February 23 drew for the first time in seven weeks.

Genscape-monitored inventories in Louisiana fell 5.64 million bbls between weeks ending March 9 and April 13. However, stocks plateaued for week ending April 13 with an 11,000-bbl increase. The slowing downward trend was representative of total monitored stocks in PADD 3. Inventories in PADD 3 fell 10.649 million bbls over the same time period, but the smallest weekly draw of 670,000 bbls took place the week ending April 13, according to Genscape.

The chart below shows the parity between the EIA’s weekly PADD 3 stock change value and Genscape’s with the additional coverage, highlighting the visibility provided by Genscape’s storage coverage. 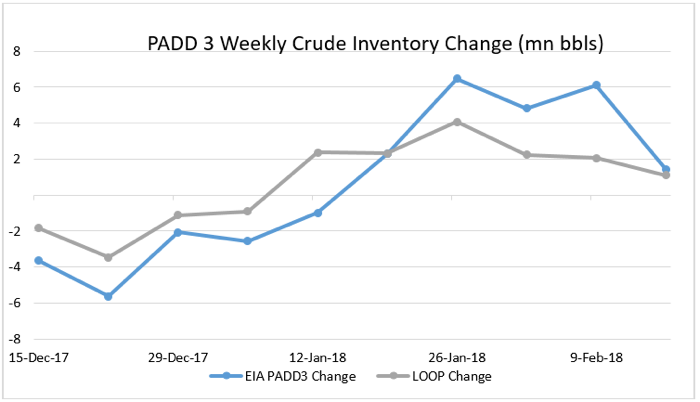