Stocks of light distillates added by 645,000 barrels reflecting a rise of 8.4% week on week. Total volumes stood at a nine-week high of 8.299 million barrels. The East of Suez gasoline market has been mostly cooler so far this week, despite spot demand emerging from India and Kuwait for September cargoes. The FOB Singapore 92 RON gasoline crack against front month ICE Brent was trading below $6/b on Tuesday, compared to over $7/b a week ago, S&P Global Platts data showed. 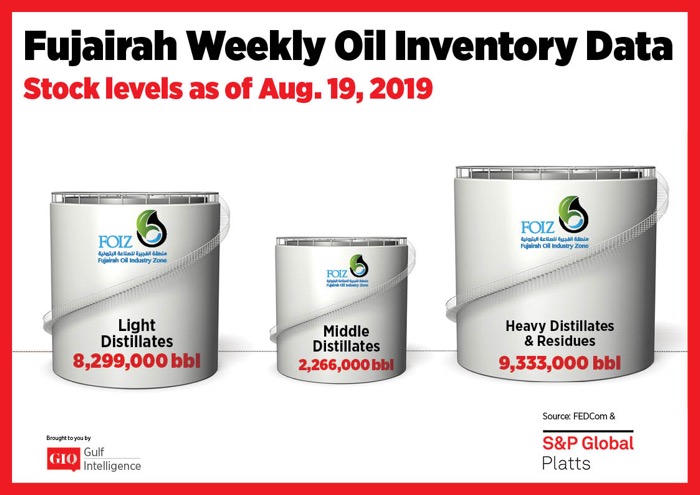 Stocks of middle distillates fell by 20.8%, shedding 594,000 barrels to stand at 2.266 million barrels. Recent upward momentum in the Asian gasoil market started to ease off amid increased supply in the physical market, but sentiments remained positive on relatively good-to-balanced demand in the run up to IMO2020, industry sources said. Middle Eastern gasoil to Europe is seeing improved economics with a weaker East-West EFS. The front-month EFS — the difference between 10 ppm Singapore swaps and ICE low sulfur gasoil futures and a key measure of arbitrage between Europe and the East of Suez — has weakened over the past three weeks, assessed at minus $7.64/mt Tuesday, down from a 10-month high of 88 cents/mt July 30. “The East/West has blown wide open, diesel will get poured into Europe right, left and center in the next two months,” said one trader.

Stocks of heavy distillates fell by 13.1%, drawing by 1.406 million barrels on the week to stand at 9.333 million barrels. Stocks dipped back below 10 million barrels amid continued tightness in bunker supply. Fujairah bunker premiums were supported as supply tightness persisted for prompt dates. “It’s still pretty tight and we are out this week,” a Fujairah bunker trader said. Fujairah is seeing some additional demand amid high prices in Singapore and other Asian locations. The spread between 380 CST delivered bunker in Singapore and Fujairah was assessed at $10/mt yesterday; other Asian ports such as Shanghai, Hong Kong and Busan have recently seen wide premiums of over $100/mt vs Singapore.