As of Monday, September 23 total oil product stocks in Fujairah stood at 18.764 million barrels. Stocks fell by 911,000 barrels or 4.6% week on week mainly on a large dip in heavy residue.

Stocks of light distillates were up by 168,000 barrels, reflecting a rise of 2.8 % week on week to 6.101 million barrels. Sentiment in the East of Suez gasoline market remained strong as the fallout from the September 14 attacks on Saudi crude facilities impacts refined product supply. According to Saudi energy minister Prince Abdulaziz bin Salman, Saudi crude production remains below normal levels, leading to a drop of around 1 million b/d in refining throughput. European gasoline has seen steady arbitrage outflows to plug shortfalls in Middle East supply. More than six Long Range ships have already been fixed to move naphtha and gasoline cargoes from Europe to Asia this week, Platts reported earlier. The FOB Singapore 92 RON gasoline crack against front-month ICE Brent crude futures was heard early Wednesday pegged between $7.90/b-$8.00/b. 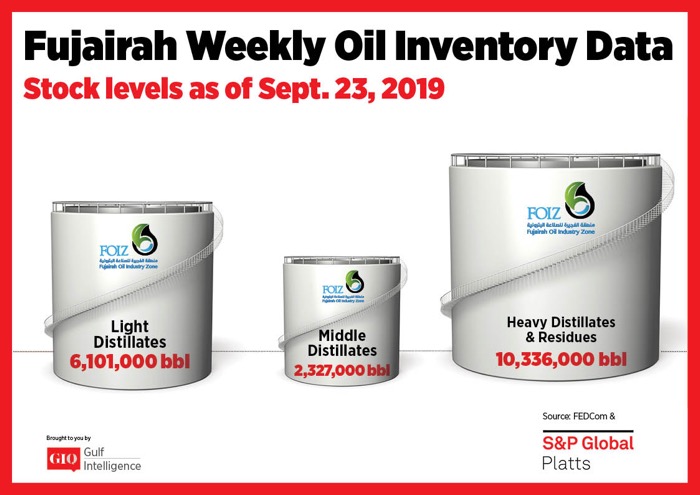 Stocks of middle distillates rose by 10.7% or 225,000 barrels to stand at 2.327 million barrels. The East of Suez gasoil market continue to find support amid supply tightness following firm East to West outflows in earlier in the month, traders said. The front-month EFS — the difference between 10 ppm Singapore swaps and ICE low sulfur gasoil futures– was assessed at minus $12.75/mton Tuesday compared to a low of minus $20.84/mt last week. “There has been a significant amount of gasoil flowing to Europe from the Middle East and India when the arbitrage was wider,” a Singapore-based trader said. “Markets are going to tighten on resupply concerns … Saudi Arabia buying is keeping markets somewhat volatile.” Saudi Arabia is a major exporter of gasoil, averaging about 600-700 MB/D this year according to JODI data.
Stocks of heavy distillates fell by 11.2%, dropping by 1.304 million barrels on the week to stand at 10.366 million barrels. Fuel oil markets have cooled considerably after the huge spike in the aftermath of the Saudi attack. Fujairah 380 CST bunker prices jumped to a year to date high of $529.25/mt on September 17 but were down to $417.75/mt Tuesday. HSFO bunker prices are expected to see further declines over the coming months as the transition towards IMO 2020 compliant low-sulfur bunker diminishes demand for high-sulfur grades. Delivered Fujairah 0.5% marine fuel was assessed at a premium of $137/mt to 380 CST Tuesday, while forward markets are indicating premiums rising to around $250/mt in 1Q 2020.