As of Monday, March 25 total oil product stocks in Fujairah stood at 24.132 million barrels rising 0.8% week on week, breaching the 24 million barrel level for the first time since the highest total stock level was recorded of 24.4 million barrels, seen on July 17, 2017. Stock reporting in Fujairah began at the start of 2017.

Stocks of light distillates rose by 0.3% week on week. Total volumes added 37,000 barrels to stand at 11.596 million barrels. For the second consecutive week this level sets the second highest weekly stock level for light distillates, with the previous high of 11.975 million barrels seen at the end of January this year. Gasoline values continued their upward trajectory seen in recent weeks as concerns of supply tightness were dominating the East of Suez gasoline market. One supportive factor was a fall in the run rate at Chinese refiners, with the average run rate in the country’s state state-owned falling to 82% of their overall nameplate capacity this month, down from 85% in February. Going forward, traders saw the market continuing to be supported with a seasonal demand increase expected in Asia. “I think the market will be sustained at least through April and May given that we are expecting demand to increase during Ramadan,” a market source said. 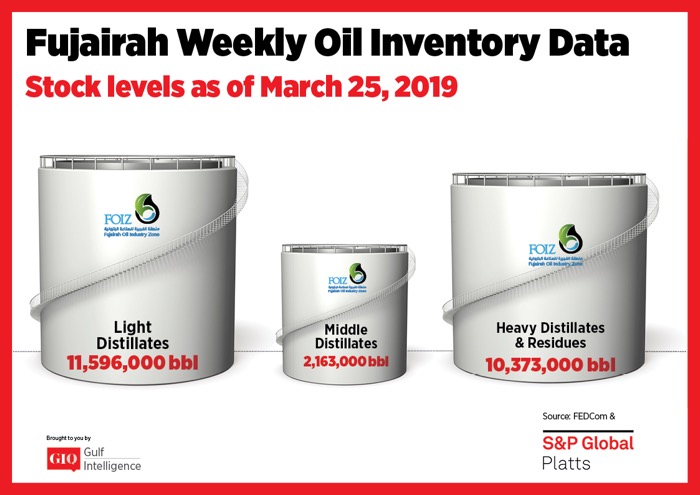 Stocks of middle distillates showed a drawdown of 4%, with stocks falling by 89,000 week on week to stand at 2.163 million barrels. The market for gasoil was rangebound to weaker – despite turnaround season entering its peak across Asia, traders noted that while exports were seen lower across North Asia there was no shortage of spot material available to the market. “I feel that the gasoil market is hazy … usually it can’t be so weak with the turnaround season [coming up],” a trader. However, subdued end-user demand could be a factor leading to the prompt weakness in the market, he added.

Stocks of heavy distillates saw a rise of 2.5%, adding 253,000 barrels on the week to stand at 10.373 million barrels. Fujairah bunker demand has been mixed for different market participants in recent days, while some trade sources noted that prompt availability was tight due to more uptake in the second half of the month. The discount that Fujairah had been enjoying for 380 CST delivered bunkers relative to Singapore has eroded in recent days, with the Arab Gulf port now pricing at a premium to Singapore. Tuesday saw 380 CST delivered bunkers in Fujairah assessed at $424/mt, a $2.5/mt premium to Singapore delivered bunkers which were assessed at $421.50/mt. In contrast through February Fujairah was assessed at a $4.78/mt discount to Singapore.