As of Monday, March 11 total oil product stocks in Fujairah stood at 21.641 million barrels. Inventory levels edged down by 0.4% or 94,000 barrels week on week. 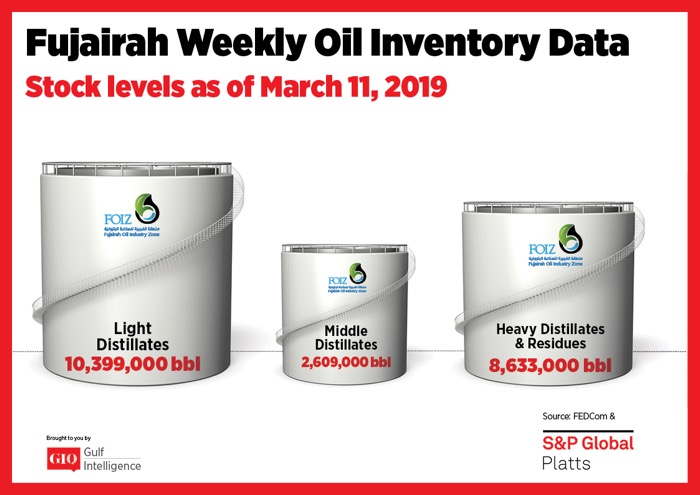 While stocks remain high by historical levels, the East of Suez gasoline market showed continued to see a recovery building momentum. “Fundamentals on both the supply and demand sides have been strong,” one market observer said. “Most recent news has been bullish, while prompt demand for gasoline has also been very good,” the source added. This was reflected by the FOB Singapore 92 RON gasoline crack against front-month ICE Brent crude oil futures assessed at $5.80/b yesterday – the highest since mid-October 2018.

Stocks of middle distillates jumped by 31.8% week on week to 2.609 million barrels. Stocks for the category were lasthigher on November 19, 2018. The East/West arbitrage slammed shut early in the week, with the front-month Exchange of Futures for Swaps, or EFS, spread narrowing drastically. At the Asian close Monday the front-month EFS stood at minus $14.21/mt, but it narrowed to minus $5.80/mt by Tuesday’s close.  “[The narrowing of the front-month EFS was due to] ICE gasoil weakness ahead of pricing,” a market participant said. Sources also said that there were enough gasoil barrels around the west Africa region to reach Europe, ensuring supply to the latter. “The arbitrage from Singapore is closed,” the source said, adding that there was a likelihood that Indian gasoil barrels will” point towards Singapore.” “The relative value to send [Indian] gasoil barrels is better than to send it West,” he said.

Stocks of heavy residues were little changed and edged up by 0.7% to 8.633 million barrels. Bunker fuel premiums have been largely rangebound in Fujairah since the last two weeks, sources said. While delivered bunker fuel prices in Fujairah were still lower than in Singapore, this has not significantly boosted uptake. Overall demand was not fantastic even though there had been a slight pick-up in buying compared to last month, sources added. S&P Global Platts data shows that the spot delivered 380 CST bunker fuel premiums over MOPAG 180 CST have averaged $10.60/mt so far in March – little changed from the average seen last month.