As of Monday, June 10 total oil product stocks in Fujairah stood at 23.889 million barrels falling 117,000 barrels week on week. Overall product stocks fell by 0.5% with draw downs in both middle and heavy distillate stocks, while stocks of light distillates saw a small build.

Stocks of light distillates rose by 319,000 barrels reflecting a build of 3.2% week on week. Total volumes stood at 10.154 million barrels. The gasoline market East of Suez remained well supplied despite discussion of run cuts by refiners in Asia, sources noted. “The near term outlook looks bearish. If China keeps exporting more gasoline in the market, eventually we are going to see the market get even weaker than it is now,” a source said. The 92 RON physical gasoline crack to front month ICE Brent futures stood at $2.93/b on Tuesday, reflecting a rise of 18 cents/barrel week on week. 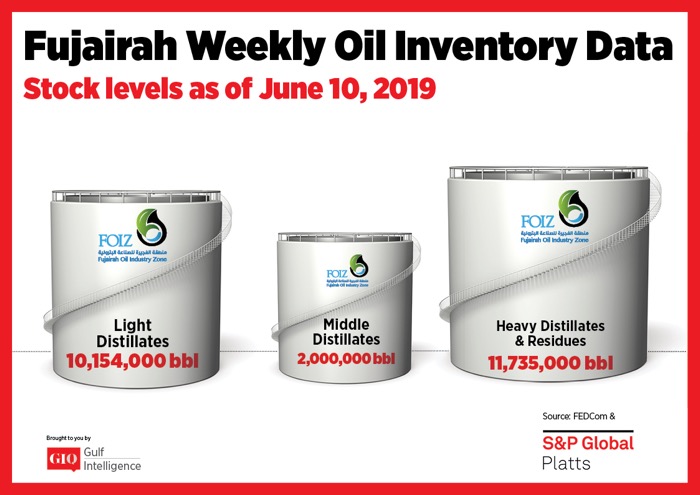 Stocks of heavy distillates fell 2.0%, dropping by 245,000 barrels on the week to stand at 11.735 million barrels. A fall in flat price for bunkers was seen as stimulating demand in Fujairah, a source noted. “It’s good, seeing big quantities now that market dropped [from previous day],” the source said. Fujairah delivered 380 CST bunkers were assessed at $385.75/mt on Tuesday, reflecting a $0.50/mt premium to Singapore delivered 380 CST bunkers.