Stocks of light distillates fell by 675,000 barrels reflecting a draw of 8.3% week on week. Total volumes stood at 7.483 million barrels. Gasoline markets in both the East and West eased as disruptions from Hurricane Barry to US Gulf Coast refining proved to be less than feared. The FOB Singapore 92 RON gasoline crack against front month ICE Brent crude futures fell to a three-week low of $5.52/b yesterday, S&P Global Platts data showed. However, premiums for Arab Gulf gasoline continued to rise amid news that the RFCC unit at Abu Dhabi’s Ruwais Refinery West is to undergo maintenance and is currently offline, according to a ADNOC spokesman. 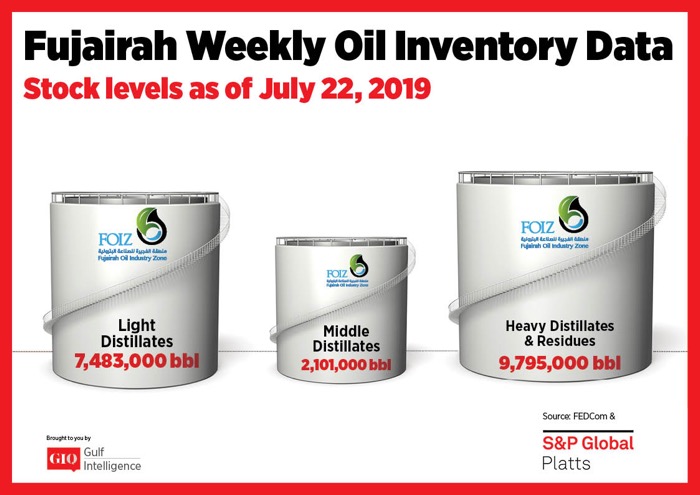 Stocks of middle distillates fell by 9.2%, subtracting 213,000 barrels to stand at 2.101 million barrels at the start of the week. Middle distillate sentiment remained positive in the East of Suez. Summer travel demand in Europe continued to bolster sentiment in the jet fuel market, while gasoil supply has so far proved less than expected. Traders also noted the ongoing tensions along the Strait of Hormuz could constrain the flow of product out of the Arab Gulf, with a knock-on effect on India and the rest of Asia. “Even if there are no disruptions, there will be an impact, insurance for vessels loading jet in the [Arab] Gulf will be higher. Indian cargoes should all be going West,” said a Singapore-based trader.

Stocks of heavy distillates rebounded by 13.9%, building by 1.195 million barrels on the week to stand at 9.795 million barrels. Stocks fell to a four-month low last week, but bounced back to close to previous level. Bunker demand in Fujairah is holding up despite recent security concerns. Some ships are opting to bunker in Singapore instead, but lower prices have helped to keep Fujairah supported. “Demand has been more due to high bunker premiums in Singapore and tightness there, but the war risk premiums are still taking a hit on things here,” said a Fujairah bunker supplier. The spread between 380 CST delivered bunker in Singapore and Fujairah was assessed at $15.75/mt yesterday,