Stocks of light distillates rose by 836,000 barrels reflecting a build of 11.4% week on week. Total volumes stood at 8.153 million barrels. Gasoline in both the East and West of Suez markets was finding support from strength in the US gasoline market which had risen sharply following Hurricane Barry making landfall in the US Gulf Coast. The 92 RON gasoline crack in Singapore against ICE Brent futures stood at $7.32/b on Tuesday, reflecting a rise of $1.05/b week on week. 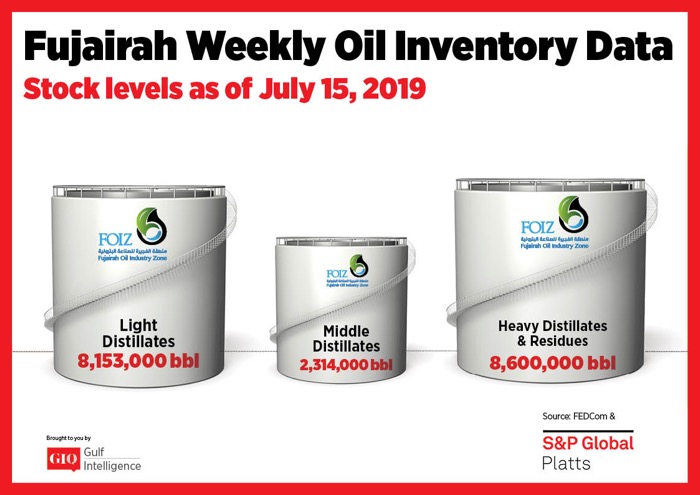 Stocks of middle distillates rose by 6.4% adding 139,000 barrels to stand at 2.314 million barrels at the start of the week. East of Suez was seeing a mixed outlook for gasoil fundamentals with support seen from increased demand across South East Asia owing to run-cuts at refiners, while demand from China and India has remained lackluster.

Stocks of heavy distillates fell 12.8%, drawing down 1.265 million barrels on the week to stand at 8.6 million barrels, falling back to levels last seen around mid-March this year. A widening of the price spread between Singapore and Fujairah delivered bunker markets was leading to an uptick in demand at the Middle Eastern port. Singapore’s bunker premium to Fujairah rallied to a $37/mt premium last Wednesday before narrowing slightly to stand at $34/mt on Tuesday. Fujairah 380 CST delivered bunkers were assessed at $418/mt Tuesday with Singapore 380 CST delivered bunkers assessed at $452/mt.