Stocks of light distillates rose by 1,140 million barrels adding 10.5% week on week. Total volumes stood at 11.975 million barrels, the highest level since January 28, when they stood at the same level. Despite the stock build, market participants were pointing to a supported market for gasoline with summer driving season said to have started to arrive. The 92 RON physical gasoline crack to front month ICE Brent futures stood at $6.69/b on Tuesday, reflecting a fall of $0.17/b week on week. 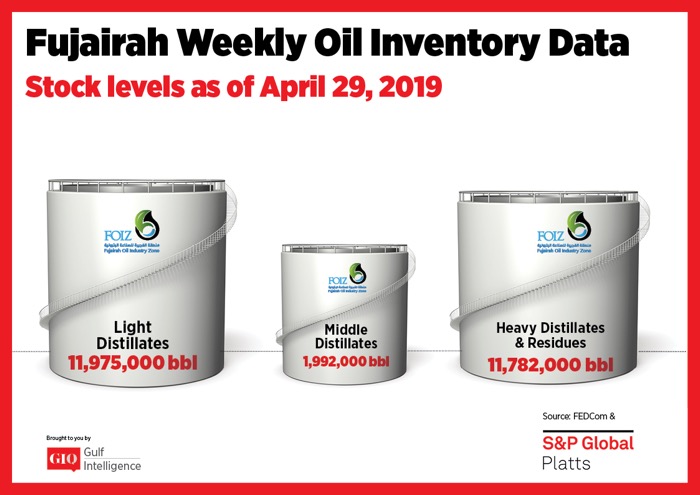 Stocks of middle distillates were largely unchanged edging down 1,000 barrels to stand at 1.992 million barrels showing a fall of 0.1%. The steady stock level was echoed in the market dynamics in Asia with market participants observing a steady gasoil market as impending turnarounds helped temper the supply overhang.

Stocks of heavy distillates fell 5.2%, falling by 643,000 barrels on the week to stand at 11.782 million barrels. Bunker traders in Fujairah pointed to ample supply available in the port as a factor keeping ex-wharf premiums under some pressure. “There are still a lot of cargo avails and bunker premiums are still very low,” a trader said. The ex-wharf 380 CST bunker fuel premium over the Mean of Platts Arab Gulf 180 CST assessments stood at $1/mt on Tuesday.