Stocks of light distillates fell for the third consecutive week falling 3.1% week on week. Total volumes fell 347,000 barrels to stand at 10.835 million barrels. This is the first time since March 11 they have stood below 11 million barrels. A falling gasoline crack was seen as evidence of some weakness in the Asian gasoline market, despite steady fundamentals in recent days. The 92 RON physical gasoline crack to front-month ICE Brent futures stood at $6.86/b on Tuesday, reflecting a fall of $0.78/b week on week and the first time since early April it has stood below $7/b. 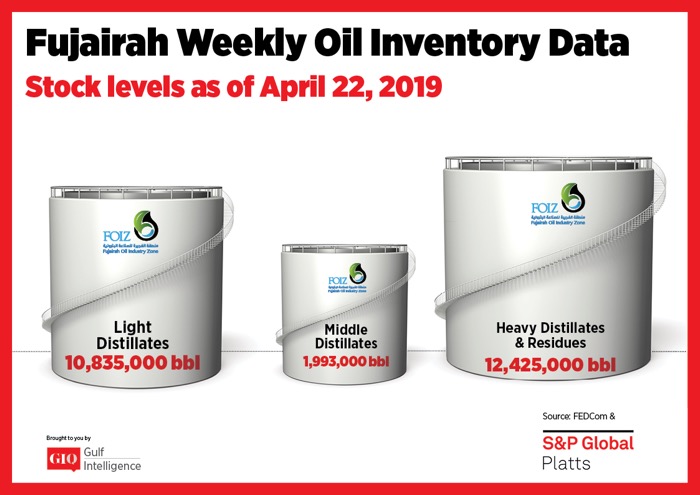 Stocks of middle distillates rose by 32,000 barrels hitting 1.993 million barrels showing a build of 1.6%. This is the first time they have stood under 2 million barrels since March 4. Despite turnarounds across Asia, poor demand was seen as weighing on sentiment. “Gasoil demand this year is really weak, despite the turnaround season and the spot market is trading at a discount,” a trader said.

Stocks of heavy distillates rose 8.9%, adding 1.020 million barrels on the week to stand at 12.425 million barrels. This is the second highest stock level recorded, with the record high of 13.456 million barrels seen on July 17, 2017. Demand for bunkers in Fujairah was seen to have picked up by Tuesday having slowed at the start of the week on an uptick in the flat price of bunkers driven by higher crude prices. 380 CST Fujairah delivered bunkers rose to a close to one month high premium to Singapore of $4.75/mt with the same premium seen on March 27. The premium was last higher on December 21, 2018 when a premium of $5.25/mt was seen. Delivered bunkers in the Middle Eastern port assessed on Tuesday at $437.75/mt.