As of Monday, April 15 total oil product stocks in Fujairah stood at 24.548 million barrels, falling from last week’s record high stock level to move down 2.2% week on week, reflecting an overall fall of 540,000 barrels. Falls were seen across all three product categories with heavy distillates showing the greatest volume decline week on week.

Stocks of light distillates fell marginally for the second consecutive week falling 0.3% week on week. Total volumes fell 30,000 barrels to stand at 11.182 million barrels. This is the fifth consecutive week that light distillate stocks have stood above 11 million barrels. Overall the bullish tone in the Asian gasoline market was holding as market participants noted a persistent tightness on the supply side. “Overall, the gasoline market is still strong with Chinese exports expected to come down in April and added support from the US driving season,” a market source said. The prevailing optimism was demonstrated in the physical gasoline market with the 92 RON physical gasoline crack to front month ICE Brent futures standing at $7.64/b on Tuesday, reflecting a rise of $0.78/b week on week, having hit an eight-month high of $9.31/b on Friday. 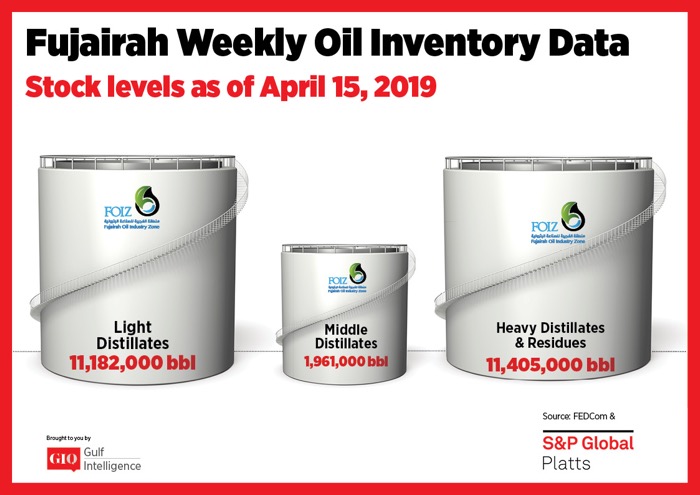 Stocks of middle distillates fell to 1.961 million barrels showing a fall of 7.9%, with stocks falling by 168,000 barrels week on week. This is the first time they have stood under 2 million barrels since March 4. There was a slight buoying of sentiment as gasoil supplies were seen tightening due to the impending heavy turnaround season in the second quarter across Asian refiners.

Stocks of heavy distillates fell 2.9%, moving down 346,000 barrels on the week to stand at 11.405 million barrels. The drawdown in stocks comes as 380 CST Fujairah delivered bunkers continued to show a higher price than Singapore, with delivered bunkers in the Middle Eastern port assessed on Tuesday at $420.75/mt a $2.75/mt premium to Singapore. In other news in Fujairah, one of the largest oil storage companies in Fujairah is boosting its expansion plans with a public listing, to raise capital to build or acquire a new terminal and tank operations. Brooge Petroleum & Gas Investment Co., which operates about 400,000 cu m of refined product storage and is building another 600,000 cu m of crude and products tanks in Fujairah, announced late Monday a reverse merger with NASDAQ-listed Twelve Seas Investment Co., in a deal that will value the company at $1 billion.